What is Deep Vein Thrombosis (DVT)?

Deep Vein thrombosis (DVT) is a pathological state in which the thrombus (blood clot) has been formed in the deep vein. Commonly affected are the leg veins (popliteal and femoral), though occasionally thrombus can be found in the pelvic area or arm veins.

What are the symptoms of Deep Vein Thrombosis?

When the deep leg veins are affected the main symptoms are:

What contributes to DVT?

Accepted factors that contribute to the formation of the thrombus (known as Virchow’s Triad) are:

What are the risk factors for developing Deep Vein Thrombosis? 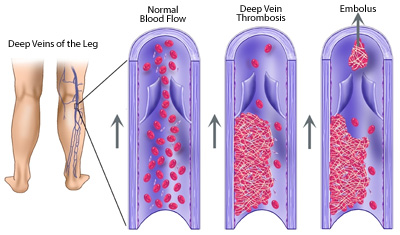 What are the known complications of DVT?

How can Deep Vein Thrombosis be treated?

Upon diagnosis of DVT, anticoagulant therapy (usually heparin then long term warfarin or other vitamin-K inhibitor) is started in order to prevent further formation of thrombi.

Thrombolysis is an interventional procedure aimed at dissolving of the formed thrombus within the vein.

How is Thrombolysis performed?

This procedure is performed by an interventional radiologist who inserts the catheter under imaging guidance (usually in the popliteal vein – located at the back of the knee) and leads it to the exact location of the thrombus. The tip of the catheter is positioned into the thrombus and the thrombolytic drug is released. Thrombolitic medication dissolves the clot, preventing possible pulmonary embolism and establishing more regular blood flow in the affected vein.

When is Thrombolysis most effective?

Thrombolysis is the most effective when performed soon after the diagnosis has been made, usually up to 10 days. The best result is achieved with the recently formed thrombi.